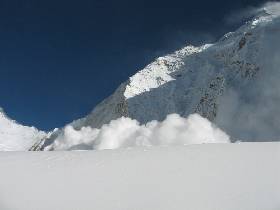 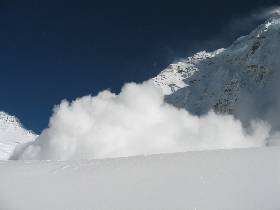 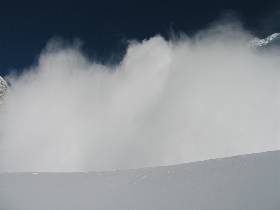 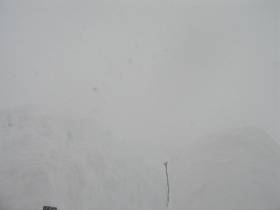 We all took it easy today at base camp; it was needed given the events of yesterday. We had a ceremony at the Puja Altar to remember Phinjo, where everyone spoke of their memories of him.

Your messages
Thanks for all your kinds words about Phinjo and the other Sherpas killed. These have been passed on.

HRA clinic again
After the ceremony Fiona and I visited the HRA clinic and they have given me some other antibiotics to try – Augmentin. Hopefully this helps my throat and chest. Although I feel fit, I am still coughing up a lot of stuff from my lungs and I still have a sore throat.

Plans
At this stage our plans are to go up to camp 1 on Monday, but this depends on the weather, how we are feeling and the progress of setting up camp 2. We want to be able to go from camp 1 to camp 2 on this trip.

Today we have handed our technology gear over to Dennis and Dan who have provided you with their thoughts and reports on their progress so far.

One of the most important parts of climbing this mountain is becoming acclimatized to living in this altitude. Base Camp is over 17000 feet high. There are no permanent human communities at this altitude anywhere in the world. Everything that we do is slower including walking, thinking and even healing up. For instance about 2 weeks ago I was helping build a helicopter pad, just in case it was needed, and I scraped my knees just a little and as of today there is no indication of any healing. At sea level it would have healed in a day or two. That is true for all parts of our bodies. So most of our time is spent recovering from something. Or in other words we lay around in our tents and read a lot.

There is a fine line between overdoing it and staying fit. That balance is up to each individual to find. At this point in our climb we all are trying to establish where that line is. As we move higher we cannot acclimatize, we can only adapt to the elevation. By that I mean we cannot live up there for any length of time, we can only adapt to the conditions. Our respiration increases, our heart rate increases, but the rest of our bodies deteriorate. In order to climb this mountain we must subject our bodies to these pressures, so that we slowly adapt our bodies to this unusual environment. The longer we stay up above base camp the more our bodies deteriorate. So each time we go up, we go higher up, but then we must come back down to base camp and heal up for a longer time. We call this a rotation and we must go through about three or four rotations.

Needless to say we get a lot of reading done. Speaking of which I am off to do some of my required reading.

This is Dan Griffith and I wanted to report on my acclimatization trip to Camp 1 earlier this week.

Monday morning was an early wakeup for Justin, Jim, JF, John, Sophia and myself…. 4:15AM. A hearty breakfast was picked at by most and we got away from camp about 5:20AM. We passed by the Chorten and sought blessings for a safe passage through the icefall….tossing rice to the spirits of Chomolungma.

A slow and steady plod through the intervening camps brought us to a point where crampons were necessary. Then each at his own pace we followed the trail scuffed into the ice over the many pressure ridges at the bottom of the icefall.

Going through the icefall
The icefall this year is much more straight forward in it’s terrain… especially in the lower section. Basically a trail with some steeper spots with a fixed rope to clip on to and to keep you on the right path.

The first ladder crossing was quite high up and it brought a couple of interesting factors. First one had to squeeze past Mallory. He is a basecamp mascot… a medium size dog… who likes to hang out on the trail and is stopped from going higher by the 1st ladder. He manages to get out on the first few rungs before thinking better of a complete crossing. I think there might be a picture of Mallory on the IMG website.

The ladder is also a wakeup from slogging on the trail, as it puts you over a substantial crevasse on a ladder that is on a small upward angle….. the fun begins!

A break in the icefall
We continued upwards, meeting some others ascending and after negotiating a broken section passing to the right we reached one of the only safe areas in the middle of the icefall, called the football field. A great spot for a sit down break! Something to eat…a Mars Bar…. and a welcome drink.

And then onwards and upwards
Now it gets steeper….. you have to see this to believe it…… huge towers of ice, broken blocks and deep crevasses….. all patched together with traverses, climbs, ladders and a thin strand of white rope, anchored to bent pickets and cheap ice screws.

Suddenly you can see a way out at the top of the icefall…. however the way is blocked by an extremely shattered area. The ice is clear cocktail blocks of all sizes with two massive towers looming over everything.

The rope stops and it’s up to you to sprint through the gulch with somewhat insecure footing to a semblance of safety at the fixed ropes on the far side. A few steeper pulls put us on the smoother slopes of the Western Cwm.

Reached the Western Cwm
Here we take advantage of the fact that we no longer have tons of ice looming over us and sit for a few minutes of well deserved rest.

From here it’s a relatively easy walk through the valley to Camp 1. The only exception being a double long ladder with a good bounce and a slight rightward tilt that gave everyone a few moments of absolute concentration.
11 AM saw us all in Camp 1 and ready for a rest.

Camp 1
Here we had 3 man domes for sleeping and a 2 meter satellite dome for cooking and sitting around in….. lucky for us as the snow started that evening and was to continue for 48 hrs.

Tuesday morning saw us huddled together in the satellite dome melting snow for water and heating up our prepared meals. Spirits were high.

It started to snow
Now the shovelling started! In total we received 150 cm of snow! When it finally cleared on Wednesday afternoon we witnessed some impressive avalanches off the Nupste face. One of them, the biggest, dusted us in our camp and sent us all scurrying for cover as the massive wall of snow and wind thundered down the cwm.

Thursday morning had us peering over the huge walls of snow accumulated by our shovelling efforts and wondering what the correct course of action should be based on a continued unsettled forecast.

Deciding to come down
13 sherpas who had weathered the storm at the Camp 2 site were working their way down valley towards Camp 1 through waist deep snow and in the end it took them 5 hours to accomplish what is normally a 45 minute walk. Our final decision was to join their downward exodus while the trail created was still clear and we reached base camp safe and sound later Thursday afternoon.

While we weren’t totally successful in reaching our goal of spending time at camp 2 for acclimatisation, we had 3 nights at 20,000 ft and got a good start towards it.

Now for some well deserved rest in basecamp ….. probably 4 days or so.

The accident
Friday morning dawned with a rude alarm. At 7AM the radios were alive with calls for help! The huge towers near the top of the icefall had collapsed catching the tail end of a long line of Sherpas carrying loads to camp 2. Three were dead….. irretrievably buried under tons of ice.

Communication was inconsistent, and it wasn’t for several hours that the situation was totally confirmed. Meanwhile, in expectation of injured survivors needing evacuation, up to 200 people showed up to construct a helipad near BC.
Unfortunately, one of our IMG Sherpas, Ang Phinjo Sherpa, was one of the victims along with 2 other Sherpas from the Asian Trekking Expedition. Phinjo was a veteran of over 20 Everest Expeditions and a well respected and strong member of the team. My sympathies and good wishes go out to his family and friends.

Today Saturday, is somber here in base camp, but plans continue for upward movement in the next few days…..

Hopefully, our luck will improve and sometime in the next month the planning and preparations will combine to give us the opportunity to try for the top!

Going up the icefall tomorrow
A Somber Day at Base Camp

In 2006, Paul Adler and Fiona Adler attempted to climb Mount Everest. We posted live updates here throughout our climb, sharing our journey with friends, family and other interested parties. Here is the daily blog from this adventure.